What is the Difference Between and Overlay and an Indicator?

A study that uses the same scale as prices are typically plotted on top of the price bars and are therefore are called overlays. A study that uses prices but is evaluated using a different scale is often called indicators. The only difference is the scale as it is easy to see one scale in conjunction with the price and another separately.

For example, in the chart of gold, the 10-day moving average is at $1,897 when gold is trading in October of 2020 at $1,880. This compares to the fast stochastic which is near 20 in late October and was as high as 80 in mid-October. The scale of $1,880 and 20 would not be able to fit on a chart which is why the fast stochastic is shown below on a different scale.

How Do You Use Moving Averages?

How Do You Use Stochastics?

An overlay is a study that uses the same scale as price, while an indicator often uses a different scale. Both an overlay and indicator can be used to generate trading strategies and help you evaluate a chart of historical prices to determine the future direction of an asset. 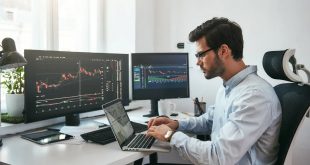 How to Choose the Right Computer Setup for Forex Trading