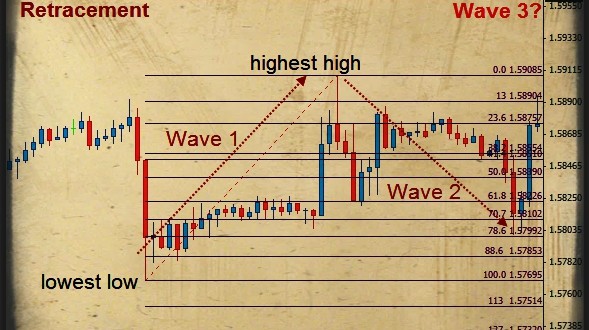 
Fibonacci expansions are retracement levels beyond the usual 100%. If you are in a buy trade and price exceeds 100%, the expansion levels can be used to find a target.

Supposing you have two waves that are in an uptrend, if you apply the Fibonacci retracement on wave 1, it can’t be used in identifying where wave 3 would possibly end. To apply the Fibonacci expansion, click on “Insert” in the main menu of your MetaTrader4 platform. Click on “Fibonacci” and select “Expansion”. The usual values for the Fibonacci expansions are 61.8%, 100% and 161%. However, you can add more levels by following the same steps in adding the levels for Fibonacci retracements. Below are the values you can use. Have a look at the example below. In this uptrend, waves 1 and 2 have already formed.
The Fibonacci expansions show the possible levels that wave 3 ends. But, what if you’re not f amiliar with the Elliot waves ? You can still use the Fibonacci expansions

Even if you’re not f amiliar with the Elliot waves, Fibonacci expansions are also useful during breakouts after a period of consolidation.

Supposing you have a ranging market, and the price breaks the support or resistance level. The expansions will help identifying where the price will most likely retrace. Have a look at the example below. We have a downtrend because the price broke the support level. This expansion is applied by connecting the swing high, swing low and the most recent swing high. Usually, the price will reach the expansion levels depending on the strength of the move. The targets are normally 100%, 113%, 127%, 141.4% and 161.8%. Now, the price has already reached 100% so we are looking for the next targets.

As you can see, price reached all the targets in the next few hours. Pretty cool, right? However, not all situations are as pretty as this, so it’s good to be cautious and use other indicators and trading techniques to back you up.